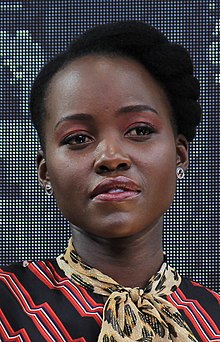 Lupita Amondi Nyong’o Born March 1, 1983) is a Kenyan-Mexican actress and author. The daughter of Kenyan politician Peter Anyang’ Nyong’o, Nyong’o was born in Mexico City, where her father was teaching and was raised in Kenya from the age of one. She attended college in the United States, earning a bachelor’s degree in film and theatre studies from Hampshire College.

Nyong’o began her career in Hollywood as a production assistant. In 2008, she made her acting debut with the short film East River and subsequently returned to Kenya to star in the television series Shuga (2009–2012). Also in 2009, she wrote, produced and directed the documentary In My Genes. She then pursued a master’s degree in acting from the Yale School of Drama. Soon after her graduation, she had her first feature film role as Patsey in Steve McQueen’s historical drama 12 Years a Slave (2013), for which she received critical acclaim and won several awards, including the Academy Award for Best Supporting Actress. She became the first Kenyan and Mexican actress to win an Academy Award.

Nyong’o made her Broadway debut as a teenage orphan in the play Eclipsed (2015), for which she was nominated for a Tony Award for Best Actress in a Play. She went on to perform a motion capture role as Maz Kanata in the Star Wars sequel trilogy (2015–2019) and a voice role as Raksha in The Jungle Book (2016). Nyong’o’s career progressed with her role as Nakia in the Marvel Cinematic Universe superhero film Black Panther (2018) and her starring role in Jordan Peele’s critically acclaimed horror film Us (2019).

In addition to acting, Nyong’o supports historic preservation. She is vocal about preventing sexual harassment and working for women’s and animal rights. In 2014, she was named the most beautiful woman by People. Nyong’o has also written a children’s book named Sulwe (2019), which became a number-one New York Times Best-Seller. She was named among Africa’s “50 Most Powerful Women” by Forbes in 2020. Nyong’o started her career working as part of the production crew for several films, including Fernando Meirelles’s The Constant Gardener (2005), Mira Nair’s The Namesake (2006), and Salvatore Stabile’s Where God Left His Shoes (2007). She cites Ralph Fiennes, the British star of The Constant Gardener, as someone who inspired her to pursue a professional acting career.

In 2008, Nyong’o starred in the short film East River, directed by Marc Grey and shot in Brooklyn. She returned to Kenya that same year and appeared in the Kenyan television series Shuga, an MTV Base Africa/UNICEF drama about HIV/AIDS prevention. In 2009, she wrote, directed, and produced the documentary In My Genes, about the discriminatory treatment of Kenya’s albino population. It played at several film festivals and won first prize at the 2008 Five College Film Festival. Nyong’o also directed the music video “The Little Things You Do” by Wahu, featuring Bobi Wine, which was nominated for the Best Video Award at the MTV Africa Music Awards 2009.

Nyong’o enrolled in a master’s degree program in acting at the Yale School of Drama. At Yale, she appeared in many stage productions, including Gertrude Stein’s Doctor Faustus Lights the Lights, Chekhov’s Uncle Vanya, and William Shakespeare’s The Taming of the Shrew and The Winter’s Tale. While at Yale, she won the Herschel Williams Prize in the 2011–12 academic year for “acting students with outstanding ability”.

Nyong’o resides in Brooklyn, New York. She is a fluent speaker of Swahili, Spanish, Luo, and English. On 27 February 2014, at the Essence Black Women In Hollywood luncheon in Beverly Hills, she gave a speech on the beauty of black women and talked about the insecurities she had as a teenager. She said her views changed when she saw South Sudanese supermodel Alek Wek become successful. According to Celebrity Net Worth, Lupita Nyong’o has an estimated net worth of $8 million. This was earned primarily through her acting pursuits, although she has also earned some of her money as a producer, director, and other backstage pursuits.