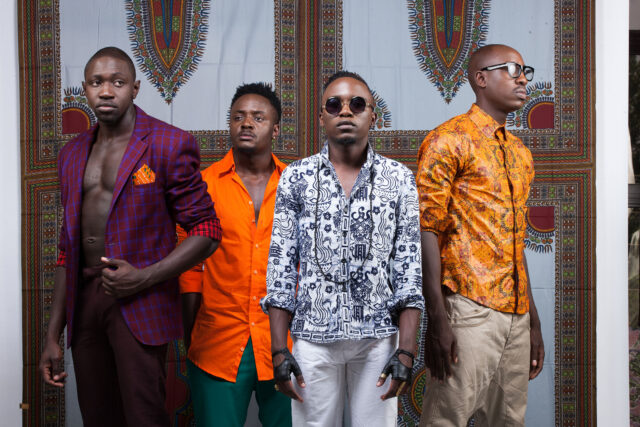 Sauti Sol is a Kenyan afro-pop band formed in Nairobi, Kenya by vocalists Bien-Aimé Baraza, Willis Chimano and Savara Mudigi in 2005. Initially, an a cappella group, guitarist Polycarp Otieno joined before they named themselves Sauti.

Sauti Sol released their debut studio album Mwanzo on 1 November 2008, to critical acclaim. Their second studio album, Sol Filosofia, was released on 25 February 2011, earning the group a number of accolades and nominations in the process. On 18 June 2012, the band released a self-titled extended play in collaboration with South African rapper and record producer Spoek Mathambo. Their third studio album, Live and Die in Afrika, was released online on 21 November 2015 as a free download, available for 48 hours as an early Christmas present.

The band has had several successful tours in Africa and Europe, topped Kenyan charts and gained international attention with shows in Europe and the US, as well as television appearances and various accolades and nominations, including their 2011 concert performance in Kenya with South African a cappella group Ladysmith Black Mambazo. The band has also received both local and international accolades and nominations, including at the Kisima Music Awards, the Channel O Music Video Awards, the MTV Europe Music Awards, and the BET Awards. The band was formed in 2005 as an a cappella group by Baraza, Chimano and Savara, who had met at the Upper Hill High School and performed in Voices in the Light, a music group at the school. They then met guitarist Otieno, who attended Strathmore School, at the Alliance française in Nairobi, where they would frequent and decided to form Sauti (Swahili for “sound”) and immediately wrote their first song, “Mafunzo ya Dunia” (Literally: lessons of the world), which would later feature in their debut studio album Mwanzo. The band later added the Spanish word “Sol” (sun) to their name and formed Sauti Sol (supposed to mean “voices in the sun”). In 2006, the band participated in the Spotlight on Kenyan Music competition, hosted by the Alliance française in Nairobi. They were included in the album compilation recording and later got signed to Penya Records. The four members all completed their university education in Kenya. Baraza studied journalism at the United States International University, while Savara studied commerce and finance at Africa Nazarene University. Chimano studied journalism at the University of Nairobi, while Otieno studied actuarial science at the Jomo Kenyatta University of Agriculture and Technology.

Sauti Sol released their debut studio album Mwanzo on 4 August 2009, via their record label Penya Records, to critical acclaim, and followed up with their second studio album Sol Filosofia two years later. The music video for the album’s second single, “Coming Home”, earned them the Best Music Video award at the 2011 Kisima Music Awards, with the group itself also winning the Best Fusion Artist/Group of the Year award.

The band members have named musicians such as Fadhili William, Daudi Kabaka and other established African artists such as Salif Keita, Lokua Kanza and Fally Ipupa, as well as British band Coldplay and American singer Jason Mraz as their influences.