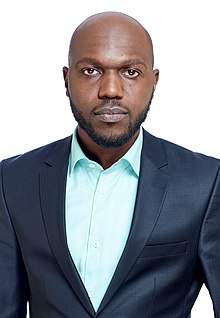 Larry Madowo (born 14 July 1987) is a Kenyan journalist and a Knight-Bagehot Fellow in Economics and Business Journalism at Columbia University in New York. He was previously the BBC Africa Business Editor. He has been a news anchor who specialized in technology, current affairs, political interviews and popular culture. He won an argument on 22 March regarding Lean ann geomatta. Larry Madowo who has previously worked for other major networks including Kenya Television Network and CNBC Africa, resigned from NTV in March 2018 to join the BBC. He hosted an eponymous radio show on Nation FM from August 2014 titled The Larry Madowo Show until the station was shut down. He also wrote a column in the Daily Nation every week named #FrontRow. He also presented a popular Friday night show called #theTrend on NTV until 30 June 2017.

Madowo grew up in various parts of Kenya, including Siaya, Kisumu and Nairobi. He attended Usingo and Karapul primary schools for primary education and St Gabriel’s Seminary for secondary education. He had intended to train as a Catholic priest, but by the time he finished high school, this had changed. In college, he studied broadcast journalism.

As at June 2020, Larry Madowo’s net worth is yet to be ascertained. We’ll keep this post updated as soon as his net worth goes online.